Three years ago it looked as if tablets were on the fast track to overtake PCs. Steve Jobs prophetically declared in 2010 that this would eventually happen. As of 2015, it still hasn’t.

Despite heavy market growth over the past few years, tablet sales are now plateauing. PC sales are still in decline but that decline is also leveling off. 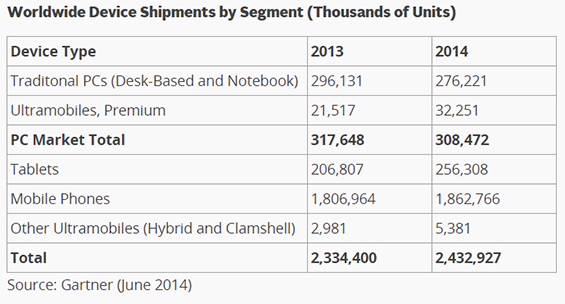 One category that is stomping them both under foot, however, is mobile phones. There were nearly 1.9 billion mobile phones sold globally in 2014. Sixty-six percent, or 1.25 billion of that, smartphones.

Impressive numbers, but I’m of the opinion that smartphones are not going to replace the PC either. Not while they are still major tools for productivity in the work place.

When you look at individual use, a study by GWI for Q3 of 2014, interviewing more than 170,000 internet users across 32 markets, found that 91 percent of respondents own a PC. That information is represented in the chart below. 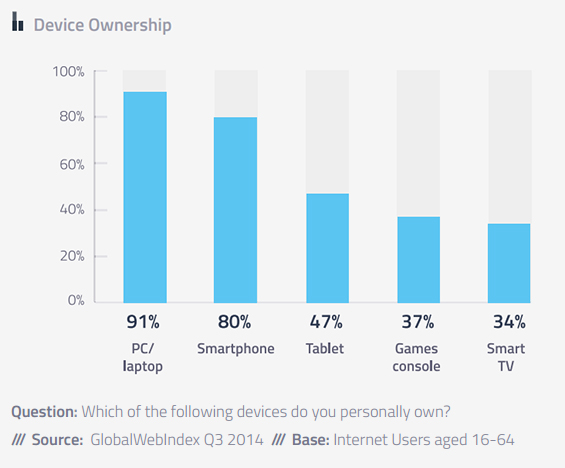 The chart also shows that tablet ownership is considerably less while even smartphone ownership is not quite on par with PCs.

The market for tablets has probably reached its maturity point. They were intriguing when Apple introduced the iPad and spurred the market for others who previously failed, but they aren’t essential devices and those who wanted one in that time now have one.

Besides, someone looking to upgrade a tablet today is choosing either a newer, larger screen smartphone or a thinner, lighter laptop. Not to knock a prophet, but tablets are clearly not a threat to PCs.

The turning point, however, is how people access the Internet.

In 2010, ninety-seven percent of consumer Internet traffic was generated through PCs. It was down to sixty-seven percent in 2013. According to Cisco that number could drop to below 50 percent by 2018.

Time spent on the Internet by device has already swung in mobile’s favor. 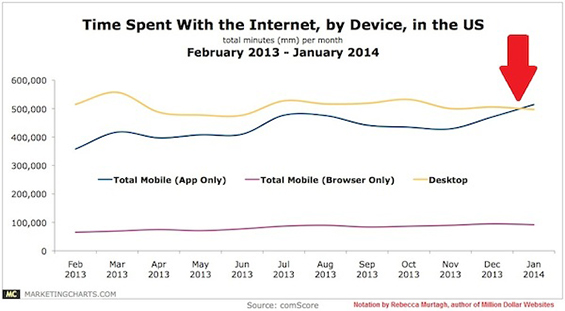 How we access the Internet is now doing the same. 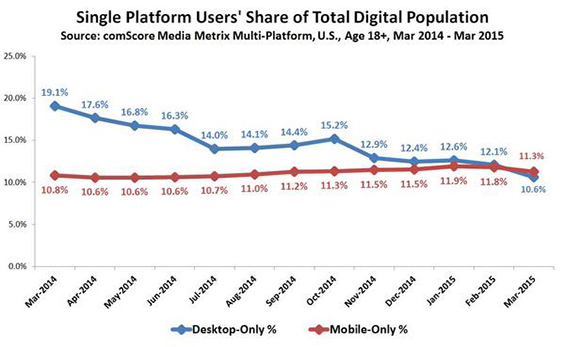 No matter how you look at it, that’s a serious decline for desktop-only access in just one year.

However, both numbers individually are fairly low. Which suggests that Internet access is a multi-device experience. Seventy-eight percent so.

This stresses the increasing role mobile is taking in our daily lives. For many it’s the only access point to the Internet. Now we’re connected 24/7 because of this ease of access and have information at our fingertips. Anytime, anywhere.

This seems like a good point to mention that access includes information about jobs. Pew Research found that nearly 43 percent of smartphone owners have looked for a job with their phone. Eighteen percent have submitted job applications.

Which brings us to another facet of usage: search.

Google recently announced that mobile search has overtaken desktop on its search engine. That’s important to note because search is always the first place one goes to find information about anything. Hint: job searches.

So while desktop usage is in decline and mobile on the rise, I maintain that mobile will not replace the desktop.

The desktop is simply too important. Not only for complex productivity tasks in the workplace, which mobile is incapable of supporting, but it remains the preferable device for consumer purchases, from which nearly 87 percent of online purchases are made.

There are other factors too, like cost efficiency with upgrades and increased computing and storage power that mobile doesn’t provide.

Instead, my guess is that mobile will continue to rise over the next several years while the PC sales decline continues to taper off and level out and mobile will eventually reach its own maturity level in the market where we’ll see the same taper and leveling off.

Both platforms will probably come to share a more or less even distribution of Internet access as both reach higher levels of sophistication and purpose and even form.

I should probably mention something about your recruiters and other HR folk being able to see this as well and understand the importance of adding mobile to your recruiting strategy, but we’re already starting to enter that dead horse territory on this blog.

I’ll just say that if you’re still recruiting from a desktop-only platform, you’re recruiting in the past and missing out on some real talent that are on that other platform.